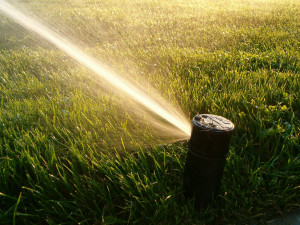 Manually start your irrigation system for each zone to check for leaks, broken pipes, damaged or tilted sprinkler heads, blocked sprinkler patterns and overspray onto impermeable surfaces such as roads and sidewalks.

Check for soft, wet spots that are around sprinkler heads. If consistent, these spots could indicate a leak that is being absorbed into the ground.

Look for dry spots. They are signs of one of the following:

Look for signs of overwatering including:

Adjust, move or add sprinkler heads if your current sprinklers do not throw water 80 to 100 percent of the distance to the adjacent sprinkler. This is known as head –to-head coverage and is essential to irrigation system efficiency.

Turn and non-turf areas should be on separate zones.
Look for signs of excessive mist from sprays which could indicate excessive water pressure or a dirty filter.

After you have inspected your irrigation system, there’s a great reason to look up and hope for clear skies! On May 20, 2012, an annular eclipse of the Sun will be visible from eastern Asia, the northern Pacific Ocean and the western United States. An annular eclipse means the Moon will not cover the Sun completely, and so when the Moon is directly in front of the Sun, there will be a bright ring of visible light on the surrounding edges, creating a so-called ‘ring of fire.’ The eclipse begins at 1:56 PDT and ends 7:49 PDT.

What people are saying about Earl's Plumbing On Facebook