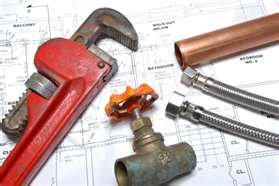 Plumbing is the system of pipes and drains installed in a building for the distribution of water for drinking, heating and washing, and the removal of waterborne wastes, and the skilled trade of working with pipes, tubing and plumbing fixtures in such systems. A plumber is someone who installs or repairs piping systems, plumbing fixtures and equipment such as water heaters.

The plumbing industry is a basic and substantial part of every developed economy due to the need for clean water, and proper collection and transport of wastes. The word “plumbing” comes from the Latin plumbum for lead, as pipes were once made from lead.

Plumbing originated during ancient civilizations such as the Greek, Roman, Persian, Indian, and Chinese cities as they developed public baths and needed to provide potable water and drainage of wastes, for larger numbers of people. Standardized earthen plumbing pipes with broad flanges making use of asphalt for preventing leakages appeared in the urban settlements of the Indus Valley Civilization by 2700 B.C. The Romans used lead pipe inscriptions to prevent water theft.

Plumbing was extremely rare until the growth of modern densely-populated cities in the 1800s.

For potable water use, galvanized iron piping was commonplace in the United States from the late 1800s until around 1960. After that period, copper piping took over, first soft copper with flared fittings, then with rigid copper tubing utilizing soldered fittings.

The use of lead for potable water declined sharply after World War II because of increased awareness of the dangers of lead poisoning. At this time, copper piping was introduced as a better and safer alternative to lead pipes.

Present-day water-supply systems use a network of high-pressure pumps, and pipes in buildings are now made of copper, brass, plastic, or other nontoxic material. Drain and vent lines are made of plastic, steel, cast-iron, or lead.

The straight sections of plumbing systems are called “pipes” or “tubes”. A pipe is typically formed via casting or welding, whereas a tube is made through extrusion. Pipe normally has thicker walls and may be threaded or welded, while tubing is thinner-walled and requires special joining techniques such as brazing, compression fitting, crimping, or for plastics, solvent welding.

In addition to lengths of pipe or tubing, pipe fittings are used in plumbing systems, such as valves, elbows, tees, and unions. Pipe and fittings are held in place with pipe hangers and strapping.

Much of the plumbing work in populated areas is regulated by government or quasi-government agencies due to the direct impact on the public’s health, safety, and welfare. Plumbing installation and repair work on residences and other buildings generally must be done according to plumbing and building codes to protect the inhabitants of the buildings and to ensure safe, quality construction to future buyers. If permits are required for work, plumbing contractors typically secure them from the authorities on behalf of home or building owners.

What people are saying about Earl's Plumbing On Facebook